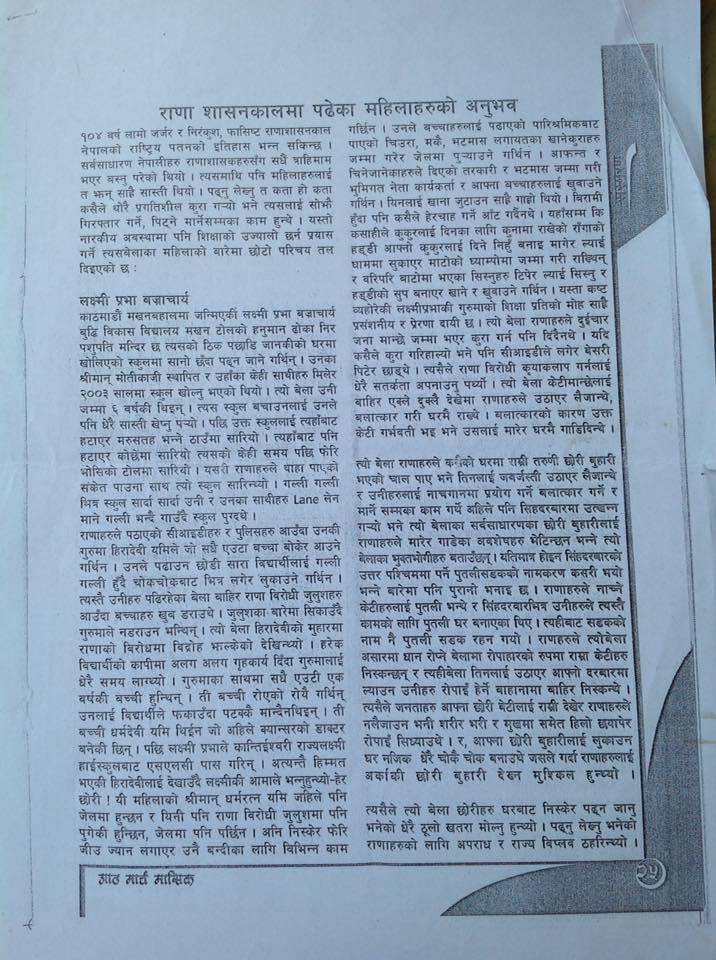 Experiences of women during Rana regime

The demise of Tyrant  Rana rule during 104 years ended due to atrocities in the nation . General public had to always spend life in terror during those days. The life of women  used to be even worse.. Besides blockage of access to education, people who performed well in life used to be the target, used to get arrested, beaten up and destroyed. Under such an extremely challenging scenario we are going to describe how a woman Heera Devi Yami managed to spread education despite all the risks involved.

Born in Makhan Bahal, Kathmandu  Laxmi Prava Bajracharya  used to study in Buddhi Bikash Bidyalaya in the building of Janaki  located behind the PashuPati Mandir near Hanuman Dhoka. Her Husband Moti Kaji Sthapit along with a couple of his friends had opened this school in the year B. S. 2003. That time she was only six years old. She too had to face a lot of risks in order to save that school.  Because of threat from ruler that school had to be shifted in Maru Satah. This school was further shifted to Kochhen and after some time was shifted to Voshiko Tole. The moment Rana ruler discover the existence of that school the school used to be shifted to next secret place. She and her batchmates used to move around singing a song saying LANE lane  mane galli school.

The lady teacher Heera Devi Yami who always used to come carrying a small baby used to secretly shift the students and hid them in the interior courtyards as soon as the CIDs and police constables used to track that school. While studying in the class students used to be scared when they hear sound of processions protesting against the Rana regime being heard outside in the road.  The Heera Devi used to explain about the protest and used to convince children not to get scared. Those moments students used to observe her face beaming with a revolutionary aggressive angry look. She had to write in each and individual copies separately which used to consume a lot of time.  During class period the irritated crying child who was around one year, used to be with the teacher disturbing the class. She used to continuously cry all the time  and she would not stop crying even when students used to try taking care of her in their laps to make her stop crying. That child is Dharam Devi who later became  a medical doctor specializing in Cancer treatment.

Later Laxmi Prava Bajracharya cleared SLC examination from Kanti Iswari Rajya Laxmi high school, Pyaphal Tole Kathmandu. Laxmi Prava’s mother used to tell her daughter praising the brave  Heera Devi Yami, the struggle of Heera devi’s husband going through often being locked up in jail. She too has led processions protesting against the Rana Regime and had landed up in jail with a child in her lap. After getting released from jail, she devoted more time trying to save political prisoners and their family members. She used to go and hand over the beaten rice, corn, Soya beans etc received from the guardians of the school children,  to the prisoners and their starving family members. She used to risk all her life going around feeding the underground revolutionists by handing over the vegetables and grains given by guardians as a service charge for educating children in the school. She had a hard time collecting food for all the underground starving political activists. Whenever she fell critically ill people were dead scared to offer help due to the risks of facing tortures by secret service agents. She even used to go to the extent of collecting the Buffalo bones reserved for throwing away by butchers. She used to tell the butchers that she was  taking the bones for feeding dogs in the house. She used to dry them secretly and store them in a big earthen pot. She used to also collect Sishnu (Nettle) found on the road sides, dry them and store them for feeding underground activists along with dry bones. Laxmi Prava's mother  used to  appreciate the dedication of Heera Devi towards politics and her love towards  educating students.

Those days Rana rulers wouldn’t even let people move around together with more than two to three people on the road. If found talking in groups the CIDs used to lock them up, beat them and release them. People had  to be very conscious while moving around, launching activities protesting against Ranas regime. Those  days if Ranas discovered  girls walking without escorts, used to be whisk away, rape them and keep them with them. After raping if the girls get pregnant,  they used to bury the dead bodies under their own residences. Those days, if they discovered young girls or daughter in laws anywhere in localities they used to take them away, use them in dances, singing. also. The sufferers of those days say that if they dig out those dead bodies buried, the skeleton of  daughters and daughter in laws still exists in haunted houses of old Rana residences.

The location on the north western side of Singh Darabar was named Putalisadak. Ranas used to call girls as Putalis meaning butterflies. They had also built Putali house inside Singha Darwar. The name Putalisadak was derived from the activities of Putali. Ranas used to land up in the farm areas in the pretext of watching and helping when farmers were engaged in planting rice paddies during monsoon times.  They used to whisk away  young girls from farms to their palaces. That was the reason why farmers covered their face and entire body with wet mud during rice plantation so that the young girls were difficult to get  identified and saved from their clutches of Ranas. The daughter and daughter in laws used to be kept in the interiors of many courtyards to save them being whisked away forcefully.

That is why it used to be very risky to physically appear on the roads  for studying outside. To punish the people trying to read and write used to be considered to be a legal right of the nation. A school called Kanya Pathsala was opened in front of Taleju Devata. The  sister of Shukra Raj Sashtri used to be the head mistress  and brother’s  wife as assistant head mistress. Padma Shumsher JBR opened Padma Kanya high school in Dilli Bajar. During those days it used to be difficult to get employment for educated people. That is why a lot of people never kept getting educated as their priority.