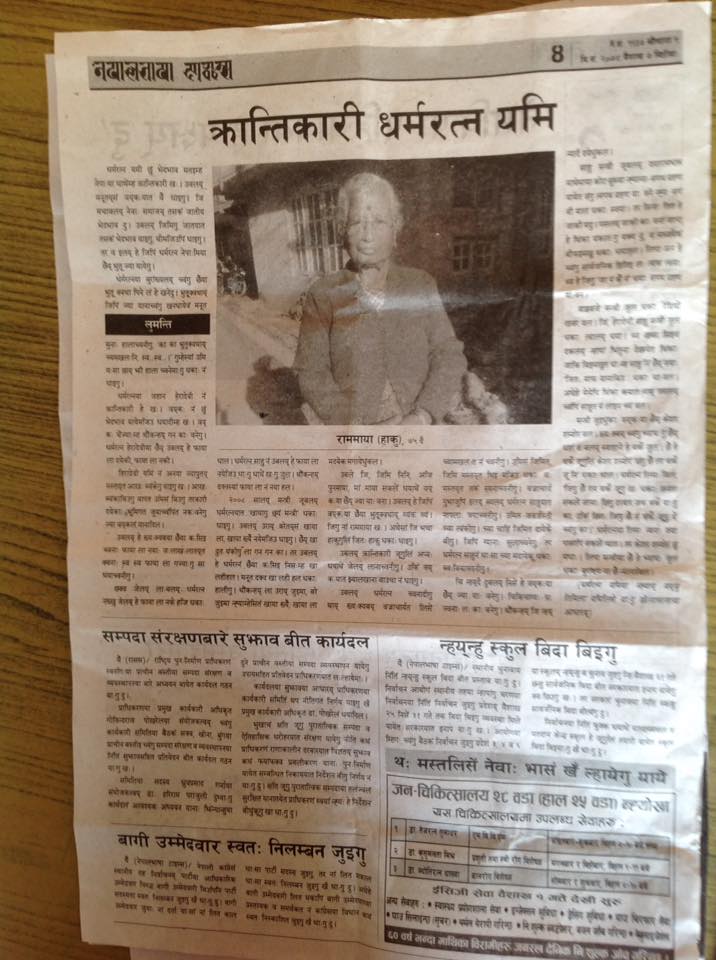 Dharma Ratan Yami is a revolutionary figure who promoted the cause of disparity in the nation. Because of this people used to call him a mad person. When I was child there used to be big discrimination in the Nepalese society.

During that period there used to be caste discrimination within our community too however during such sensitive period of going against social norms Dharma Ratan Yami used to make me amd my grand mother work in the kitchen. People from the surrounding area and road could see activities inside the kitchen of the fifth floor residence of Dharma Ratna Yami. When we used to work in the kitchen people on the road and the neighbours used to openly shout criticizing saying “Look look untouchables are working in the kitchen”.

Some would reply saying “ What is the harm if the family members approves going against social norms” Dharam Ratna Yami’s wife is an equally revolutionary type. Normally the wife objects to going against social norms however she used to go around preaching eradicating this unwanted social transformation. How can we ever have such a couple who have such compassion for the untouchable during those days.

Heera Devi used to teach children of farmers too including the children of untouchables then. In return for the service the guardians used to give her vegetables and food grains. Teaching children used to be not easy and used to be harassed if discovered by rulers. It used to be risky for guardians too. She used to go and feed the ailing prisoners and starving wives and children of prisoners.

His old residence area is called Khyo Keb, next to Shanteni Kunja school. From the top floor he used to call out to all the neighbours and display the flesh of pigs shouting” Look Look I have cooked the meat of pig. Look, I am eating and it is very tasty. During those days touching pigs used to be banned hence eating pork used to be banned in the society. He used to promote pig meat in the society then. Now everyone eats pig meat. Pigs used to be eaten by only untouchables those days.  While he was locked up in Nakhu Jail in Kathmandu in the 1940s he used to order pork meat and we used to deliver.

In AD 1951 when he became minister people used to call him head of HEN minister. Eating flesh and eggs of chicken used to be banned in the his community. Even today, older generations don’t eat chicken egg. They eat duck meat and eggs. Touching chicken used to be banned those days. However during the 1950s he had 200 chicken farms on the top floor of his residence making them visible to neighbours and pedestrians of the road. People on the road used to gather together and laugh. However today people have changed and all those communities including Bajracharyas also eat chicken and egg. He even made us cook a feast for political leaders and relatives in A D 1851 when he was holding the portfolio of Minister. After the party he introduced my grand auntie and his friends to the people. The next day they all were seen taking bath at the river in Pashupati temple, sprinkling water dipped in gold and doing pooja through the pandit of that temple.

Those days I used to go along with my grand aunt (NINI) Pun Maya who used to work at his residence. My name is Ram Maya. My skin is dark and everyone calls me Haku meaning dark skinned person.

During those days any one who had  revolutionary thinking used to be handcuffed and locked up inside prison. He used to be frequently arrested and people used to call him Jhyakhana baucha.At his old locality at Khyo Keba Bajracharya used to stay with untouchables then in the neighborhood. Those Bajracharyas used to teach their children not to touch untouchables.

When he became minister he wore the coat of Daya Ram Bhakta Mathema while taking oath in the cabinet. Before going for the Oath ceremony in the cabinet we tried to put Sinha ( TIKA : Red powder mixed with curd and rice in the forehead) ,  however,  there was no rice grain in that house then. When we went to borrow rice from a nearby shop the owner of the shop refused to give us a little rice showing the list of previous unpaid items. Then he went to public tap and drank a lot of water telling people around saying “This is both my rice and pulses(daal)”

At 12 PM there was an announcement on the radio that he had become minister. People in the locality heard this news. Heera Devi disclosed this news to the local people. After hearing this news the first one to arrive to congratulate  was the shopkeeper of the morning  apologizing for refusing to give a bit of rice grain for preparing TiKa. Similarly the other shopkeepers came rushing in to congratulate him with Sagan where Heera Devi had not paid money while taking food items on credit while feeding large numbers of underground activists secretly.

After he became minister  Keshar Samshere Jumgh Bahadur Rana visited the house. While climbing a broken wooden  staircase he fell down. He said your house is not fit for living; It shakes. Dharma Ratna replied to him" It is not my house shaking. The collective movements of citizens shook your palace. That is why it is what is shaking your mind". Listening to the reply, all my friends around that place got frightened.

I found Heera Devi Yami to be very different from other ladies of the society. She used to be harassed by community members for trying to  transform  the  society which was not an easy thing to do. She used to tell us her experience of witnessing physically Gandhi movement in India in Kolkata and Kalingpong before 1947,